Andy Warhol would have been 88 today. He most certainly would’ve loved the number, its shape, the repetition of the symbol of infinity, and, as 8 is the Chinese lucky number: “Maybe they’ll buy my paintings!”

There was nothing natural about Andy, everything was a construction, everything was make-believe. He took the mendacious social codes of the 50’s and transformed them into a queer (as in strange and gay) self-serving artsy pose. With one single goal in mind: make the most money at the least expense. What’s more American than that : )

You become an artist because you decide to. Being a wonderful draftsman and having an eye for color certainly helps, but the true success of an artist of Andy’ s generation lies in the “idea”, the thread that leads the art and makes it pertinent. 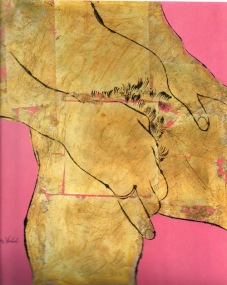 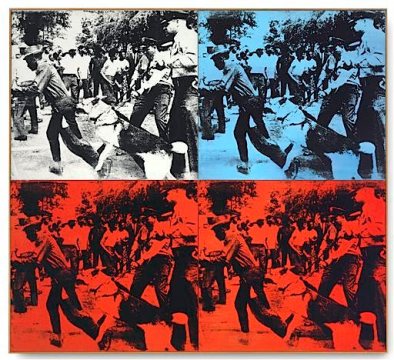 Self-portrait 1964 ©AWF
Andy is prominent among a list of ‘Creative Directors’ who have a feel for what is trending and use shock as an attention grabber. A masterful communicator and polymorphous teaser, he would’ve loved Twitter, Instagram and Snapchat.
A beautiful example of this constructed persona is revealed in a filmed interview where he responds vaguely to the somewhat dismayed journalist:  “I am what you say I am”. What a performance! Andy, a true Leo, with an ego larger than the Grand Canyon, pretending to be a mere thoughtless and selfless sponge is quite hilarious.
His true genius lied in transforming his desires, greed, avarice, superstitions, fears and sexual frustrations into art. Art that has been reproduced, copied, imitated ad-nauseam, and, is simply inescapable. 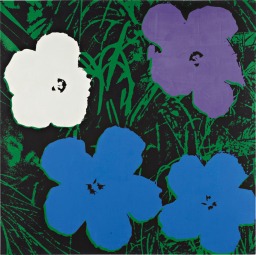 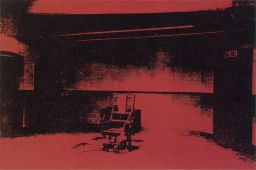 While growing up extremely poor in Pennsylvania, the Movies were Andy’s preferred past time and first opportunity in studying how ordinary people could become “other”. Undoubtedly stirred by Scarlett O’Hara’s cry: “I’ll never be hungry again!”, this awkward looking, determined, fay creature set himself on a path to transformation and success.

Andy’s paintings are based on two simple principles. Multiples: (reproduce the same image many times) and use the least expensive technique. The use of multiples comes from his religious upbringing. Andy intrinsically understood the powerful effect of repetition. Roused at an early age by Orthodox Churches glistening with thousands gilded Icons; countless reproductions of the same image scintillating above a myriad of flickering candles.
Andy’s technique was rooted in first year Art school simplicity. Take a copyright free photograph, blow it up, silkscreen it and, with the new water-based, inexpensive easy flowing acrylic paint, print them onto canvas as many times as you want. Use relatable, secular Icons such as Elvis, Marilyn, Liz, Jackie! And make them big. America is big, bold and colorful. 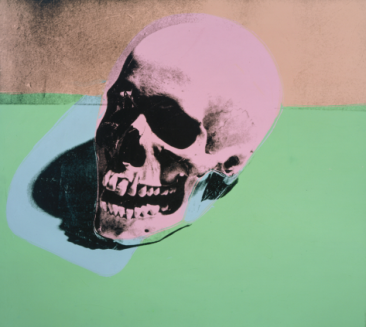 Camouflage, 1986 ©AWF
Bear in mind Andy’s conversation with Henry Geldzahler in the early 60’s as he was complaining about Roy Lichtenstein’s success and how to best him. Henry replied: “Andy, just paint what you love and crave for: money, boys, movie stars and Coca-Cola”
So there you have it: it takes talent, determination, the will to adapt, and being able to channel one’s paradoxical character into a single aim. Andrew Warhola, son of poor, uneducated immigrants from Miko, Slovakia became a symbol of America’s power of transformation and opportunity.

Thank you paradoxical America, Thank you Andy. Love you.

All images © The Andy Warhol Foundation for the Visual Arts, Inc.